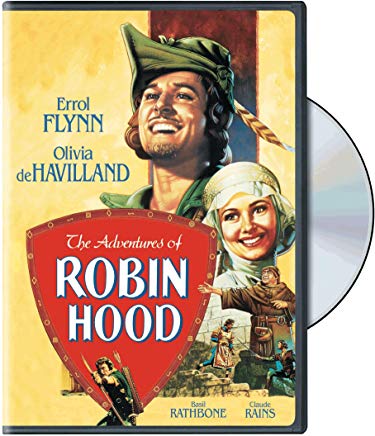 The original reception and the original reviews of this movie are really something to stick with, as they speak nothing but the truth. As Frank S. Nugent of New York Times said back in the day: â€œ(Itâ€™s) a richly produced, bravely bedecked, romantic and colorful show, it leaps boldly to the forefront of this year’s bestâ€.

Apart from being a â€œhigh class entertainmentâ€ as rated by Film Daily, it was also made in a high class manner in terms of production at the given day and age. The production cost for this motion picture was estimated at $2 million, which is the most expensive film made by Warner Bros up until then. Furthermore, it was the first Warner Brosâ€™ movie deploying the three-strip Technicolor process.

The story of Robin Hood could be considered â€œcommon knowledgeâ€. Based on the ancient legends and old ballads emphasizing the oppression of Saxons by the Norman knights, the motion picture â€œThe Adventures of Robin Hoodâ€ is a classic tale.

In King Richardâ€™s absence, the Norman Lords, led by Prince John â€“ the Kingâ€™s brother, start oppressing the Saxons by raising the taxes. Prince Johnâ€™s main goal is to secure the throne for himself in his brotherâ€™s absence. However, thereâ€™s one rebel among the masses. The nobleman Sir Robin of Locksley seem to be the only one who disagrees with the current situation. However, as he later discovers, he is not alone. Robin gets labeled as an outlaw and is forced to run. He takes cover in Sherwood forest, which will soon become the headquarters of his operations. Accompanied by Much the Millerâ€™s Son, Will Scarlet and Little John, along with numerous other men who will later join their cause, Robin swears an oath to fight for Free England until the return of King Richard.

They fight against Prince Johnâ€™s men, stealing from the rich and giving to the poor, and eventually manage to succeed in their endeavors. The plot is crowned by a great romance between Robin and Lady Marian â€“ who have helped Hood and his men escape when they were captured by the Sherriff of Nottingham. Upon King Richardâ€™s return, Robin is named Baron of Locksley and Earl of Sherwood and Nottingham and he eventually receives an order from the King to marry Marian.

Warner Bros production as well as director Michael Curtiz made no mistake in starring Errol Flynn as Robin Hood. This role established this actor as a glorious adventure hero, and considered by many a true Hollywood legend. Robinâ€™s paramour, Lady Marian is portrayed by Olivia de Havilland. Other notable cast members include Basil Rathbone, Claude Rains, Una Oâ€™Connor and many others, accompanied by a great number of stuntmen.

Erich Wolfgang Korngoldâ€™s music score perfectly wraps up the mixture of adventure and romance that contrasts within this picture.

In a nutshell, with 3 Academy Awards, magnificent production, great reception, amazing acting and a classic plotline, this could be considered truly an epic movie.