SPIDER-MAN: INTO THE SPIDER-VERSE (REVIEW) 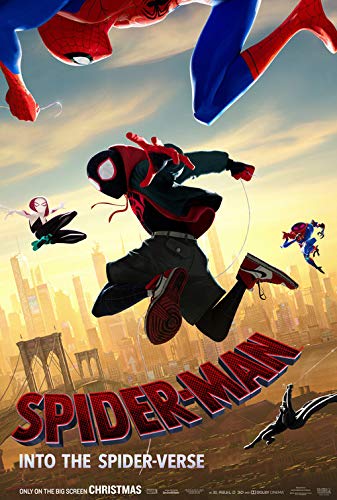 Life can be pretty hilarious sometimes, yet there are moments of sadness as well. The people and the situations that we encounter on a daily basis might as well be very serious or completely silly. â€œSpider-Man: Into the Spider-Verseâ€ represents a perfect blend of those every-day emotions; a serious approach, brilliant humor and a touch of poignancy.

Written by Phil Lord and directed by Rodney Rothman, Peter Ramsey and Bob Persichetti, this film radiates great story-telling and a marvelous animation. The main goal, which they did manage to achieve, was to make the viewers feel like they â€œwalked inside the comic bookâ€.

This movie doesnâ€™t contain the usual Spider-Man plot, though. For starters, the story isnâ€™t built around Peter Parker. In this edition, the story follows the Miles Moralesâ€™, a Puerto Rican/Afro-American youngster from Brooklyn, advancement towards becoming Spider-Man. This struck me as a very unique idea and the whole crew behind the scenes really made something truly fascinating.

There’s something unusual proceeding in New York City, and it turns out to be the greedy crime boss, the Kingpin, messing with the nuclear supercollider, which results in opening a passageway to different dimensions. A whole bunch of Spider-Men (and women) from parallel universes end up with Miles on a mission of keeping Kingpin from smashing all reality.

The storyline, though, isnâ€™t strictly bound to battling evil, as it also follows young Moralesâ€™ dealing with teen angst and familial drama. The movie even displays two versions of Peter Parker. Peter is represented as a sort of a mentor to young Miles and the relationship between them could be considered the leitmotif of this picture.

With a great plot, magnificent direction and visuals, astonishing voice-work followed up with the overall vibe of the movie, this could be the best Spider-Man film of all time. It’s fun, energetic, captivating, enchanting, energizing, stacked with heart â€” all that you could require from a superhuman movie.
Eric Eisenberg of â€˜CinemaBlendâ€™ summed it up perfectly, in a single sentence, saying that the movie is: â€œa stunning tribute to everything the character representsâ€.